“Nonetheless starting third and sixth on the grid here for what’s bound to be an exciting start tomorrow is not a bad place to be.” END_OF_DOCUMENT_TOKEN_TO_BE_REPLACED

Red Bull racing, currently known as Infinity Red Bull Racing is an Austrian F1 racing team. Along with Scuderia Toro Rosso it is one of the two teams owned by Red Bull GmbH. The origins can be traced back to the Stewart Grand Prix outfit that debuted in 1997. In 1999 Jackie Stewart sold this team to Ford Motor Company which was then rebranded as Jaguar Racing for a short period of time. In 2004, September the Jaguar Racing Formula One constructor and racing team was put up for sale. On 15 November, Red Bull, an energy drinks company bought the Jaguar Racing.

In its debut year, 2005, the chassis was named RB1. The Red Bull racing team still has access to the Cosworth engines. The team was led by the former McLaren driver David Coulthard. Although owner of Red Bull, Dietrich Mateschitz tried recruiting formula one driver and BMW Motorsport chief Gerhard Berger, which was never realized. Coulthard was recruited for his experience to lead the rookie team. Red bull’s debut year was a stupendous success compared to its predecessors. In 2005, red bull team announced a deal with Ferrari to use Ferrari engines from 2006 onwards, this was a result of mandating the use of V8 engines. On the 15th of December 2006 RB2, the team’s second car, hit the track for the first time. 2007 was the debut year of RB3 designed by Adrian Newey.

On 31 august 2006 the team announced their decision to use Renault engines for the 2007 season. The team continued with the same drivers after finishing 5th in the 2007 Constructors Championship. At the Jerez Circuit RB4 was presented by Red Bull. in 2012 the team had retained both Sebastian Vettel and Mark Webber with secure engine supplies from Renault. In 2013 the team was rechristened Infiniti Red Bull Racing for the season.

Red bull is circulated as a revolutionary energy drink in more than 50 countries now which includes all of Australia, Europe and the USA too. The range of its drinkers is much diversified- from swimmers to athletes to weight lifters; everybody has had a go with it. It is served in bars with drinks too, to go with the usual cocktails and everything.

It has become such a famous drink which has a very big audience. So huge, that there is a craze, a fan following and a love for this drink which is not easy to sweep away soon. At midtown Atlanta there is this trendy bar called Cosmopolitan whose owner, Scott McCray claims the fact that he has witnessed such craze about a product for the first time. A 25 year old Dana Williams at the same trendy little bar in Atlanta is heard saying that she is aware about the fact that red bull is not known to have done any good to anyone in the future but she does not give a second thought into this before having her favourite drink of the day.

Although to the company itself the drink is completely safe to consume. The general manager Mr. Kraihmer also goes on to say that this drink has been in circulation for the past fifteen years in more than 50 countries so there is no chance of any harm about this r drink. However, nutritionists have a completely different opinion. They believe that kidney and heart problems and severe dehydration can be the symptoms of over-drinking this energy drink. Dehydration may prompt the person to increase his intake causing more harm subsequently.

The marketing to this product has been done very cleverly making it a hit in most countries- convenience stores mostly beside gyms and colleges and places near nightclubs are the best places.

Vettel turned out a commanding performance under the lights at the Marina Bay Street Circuit, taking one of his favorite races as he won the Singapore Grand Prix for the third season on the bounce. It was his seventh win out of thirteen races so far this season and the third straight win since the Formula One season resumed after the summer break in August.

But with each crushing victory he manages, his popularity seems to be on the wane more and more and not for the first time this season, his dance at the top of the podium was greeted with loud jeers from the crowd, even though he has broken the f1 betting odds to become the most-backed driver in history.

And Horner, who for once decided to join his driver for the national anthem and champagne spraying heard enough of the boo boys to come out in defense of Sebastian Vettel.

According to Horner, Vettel drove an unbelievable race, adding that they were lucky enough to witness one of the best drives in history in terms of raw pace and what the driver was able to deliver on the track. And for that driver to not get the kind of reception he deserves and instead, be booed, is definitely not sporting at all. Horner mentioned that Vettel himself says it doesn’t affect him and he doesn’t feel it a bit and that he has very broad shoulders. 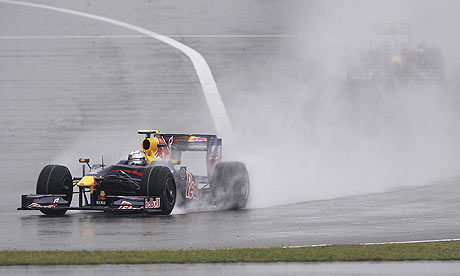 But according to Horner, at the end of the day, Sebastian Vettel is a human being and like any other human being, he is bound to have feelings and when he drives his heart out and still not get appreciation, it is bound to be disappointing for the German.

The second season in the team has been left vacant following the Australian’s decision to quit the team for Porsche in the sports car racing circuit at the end of the current season. Christian Horner, the team principal of the champions stated that they would be absolutely foolish to ignore the former world champion but also admitted that the Toro Rosso pair was also true contenders for the spot.

Eric Boullier, the team principal of Lotus F1 stated recently that he hopes his driver decides to stick around with the team. The Frenchman mentioned that Red Bull Racing is chasing his driver and he wants to keep hold of their driver and ultimately, the decision will come down to the driver. He also mentioned that the team has been in dialogue with the Finnish driver who is a bit perplexed about the future after a change in the ownership pattern of the team a few weeks back and has sought clarity.

Boullier has mentioned that Raikkonen is aware of the environment and added that he knows that this kind of environment suits him.

Meanwhile, the Red Bull Racing tem principal stated that they do not want to be rushed into taking a decision regarding the future and will only name the successor to Webber once they are completely sure about his potential and capabilities to take the team forward in the long run.

The former Renault boss Flavio Briatore has said that Red Bull will not be able to sustain the pair of Mark Webber and Sebastian Vettel for long. The two drivers have been not having healthy relationship for the last couple of years. The relationship between them decorated completely after the Malaysian Grand Prix in which the German driver Sebastian Vettel ignored the team orders to overtake Webber in the final few laps of the race. Briatore is a well-known figure in the career of Mark Webber, as he was the manager for a long time.

He has said that both drivers are extremely competitive, but the Australian is left extremely unhappy at the immature actions of the 25-year-old three-time world champion. Webber has been at Red Bull on a rolling contract basis, and his current contract expires at the end of the season. Briatore has said that he does not see the 36-year-old Australian staying at Red Bull beyond the season. Briatore has said that Webber and Vettel decided to continue in the same team – even though they did not get along with each other – because the car was extremely good. Red Bull clearly have the best car on the grid, and both drivers are willing to part ways with the team.

“That’s for sure. Last year, already, there were problems. Their car is very competitive so drivers want to stay there, but [Sepang] was proof that no one is in charge at Red Bull. Vettel is the boss there. You can’t have a team manager also doing the driving. I think there’s no relationship anymore. Vettel says he will help Mark, but Mark doesn’t need any help. He should have won the race, and it’s possible that Vettel will win every other race,” said the former Renault boss after the Malaysian Grand Prix.

The Red Bull racing team principal Christian Horner has said that the team has not been experiencing a lot of pressure due to the success that they achieved in the last three seasons. Red Bull have been the dominant force in F1 over the last three or four seasons. This has in turn helped the team win several constructors championship title, while also helping Sebastian Vettel to win three world championship titles consecutively. The McLaren team principal Martin Whitmarsh recently revealed that Red Bull are the only exception to the norm of F1 teams losing money in the current economic climate.

Red Bull have managed to win both the titles – driver’s and constructor’s – on offer in the last three seasons. They have comfortably overshadowed the likes of McLaren and Ferrari in all departments. Horner has said that the six titles achieved in the last three years has helped lift pressure off the team ahead of the new season. The only pressure on the team is the pressure that they put on themselves in order to match those achievements of previous years. Horner has also rejected speculation that the hunger and desire within the team has reduced slightly due to the recent successes.

“In many respects the pressure is off us because we’ve achieved a triple double World Championship. Nobody can take that away from us, that’s in the history books. But we put the pressure on ourselves because we want to continue that run of success. Of course, going into the season as reigning champions, you’re there to be beaten, you’re there to be shot at. But it’s something we’ve got used to over the last couple of years. Pressure is part of this business, it’s part of this sport,” said the team principal in an interview given to the Sky Sports.